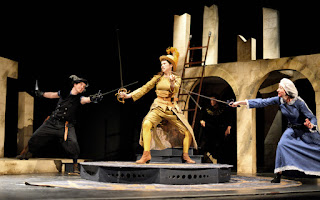 Romeo and Juliet came to Grantham this week, in the form of the Icarus Theatre Collective. Anyone who thought that R&J was for softies will have had something of a shock, as this was as energetic, rude and bloody an affair as any Tarantino fan could hope for. From the off, the playing was superb, clear, vital, and the audience were irresistibly sucked into the high japes and low manoeuvres of a fractious and dangerous Verona. The set was brilliant in its simplicity. You got a balcony and a ladder – that’s it – but with the players smuggling in scene-specific props, that was the only infrastructure needed, and it freed up the stage for this breathtaking performance.

Two clans at war. The son of one falls for the daughter of another, and all hell breaks loose. Not a new idea, even in Shakespeare’s time, but a storyline that highlights the paradoxes, absurdities, joys and injustices that tribalism sustains.

This was very much a play of two halves. The first, a dynamic, joyous affair of rivalry and heart. The second half, a desperate spiral to inevitable death, leaving some in the audience sobbing.

But the play’s the thing, and the players were magnificent. A great performance reveals something fresh to the audience, and for me the great revelation was the central role of the loyal, gauche, Nurse, forcefully played by Gemma Barrett. Indeed, the story arguably centres around the woman who brought up Juliet, and loves and understands her more than any other. The tragedy turns on how Nurse’s well-meaning loyalty and advice to Juliet seal the teenager’s doom. Here is a dark, bloody precedent to Jane Austen’s Emma. The role needed an actor of charisma and sensitivity, and Gemma Barrett’s portrayal of this bruised, well-meaning, loyal woman was electrifying – at times hilarious; at other times, wounded and desperate. Hats off to Ms Barrett.

This was, however, a troupe of equals, with no weak performances. Kaiden Dubois’ Romeo was boy-band gorgeous, and his energetic portrayals of the peaks and pits of first love were life-affirming. In Juliet, Nicole Anderson had a difficult role, playing a young girl exploring her sexuality, caught up in a hard, adult, political world. Whereas her acting was light and devoted in the first half, she came to dominate the stage in the second, pulling the audience into her incomprehending hurt. I heard sniffles behind me as she desperately tried to make sense of Romeo’s banishment. For me, all future Juliets must compare with Nicole Anderson’s vulnerable naive.

David McLaughlin was Mercutio. No, I mean, he really was Mercutio. One of the great challenges for the reader, and presumably the player of this role is the monologue about Queen Mag, which up until now I thought over-egged and over-long. David McLaughlin, though, brought a fresh, physical and funny interpretation to this, and made me wish it wouldn’t end. The interplay between Mercutio and Christopher Smart’s Benvolio was bawdy, witty and knowing – it was like being in a pub with two very rude, but very funny mates. What was fascinating about McLaughlin and Smart’s playing was that they really seemed to be enjoying themselves, and it seemed at times that they were indeed throwing lines around for the sport.

Shock, horror . . . Tybalt was played by a woman, Gabrielle Dempsey. From now on, I want all my Tybalts to be played by women. Actually, I want them all to be played by Gabrielle Dempsey. As soon as she hit the town square, your gaze shifted to the alpha female – beautiful, intelligent, charismatic, athletic – what’s not to like here? But Gabrielle Dempsey’s role amounted to a further departure from the Tybalts of old in that she was admirably dutiful to her family, and reluctant to fight and eventually kill the fun loving Mercutio. As this finest of women sat sobbing next to Mercutio’s corpse, I sensed that Gabrielle Dempsey has transformed Tybalt for ever. Tybalt a man? Never!

Georgina Periam was also excellent as the pragmatic, compromised Lady Capulet, and her scolding of Juliet showed well the regrets within. Hubbie, Lord Capulet , played by the imposing figure of Zachary Holton, provided the gravitas, not just for this role, but as the bemused and sad Prince Escalus, whose city is riven by this bloody affair.

Afterwards, as I was reflecting on the amazing performance, I learnt that this was to be the troupe’s last rendition of Romeo and Juliet. This saddened me, as I would love to see it again. I’ll miss the swordfights, the laughs, the tears . . . Oh well, I shall just have to go to the next show by this freshest, most inventive and passionate of troupes, the Icarus Theatre Collective.

Well done to Director, Max Lewendel and to Guildhall Arts Centre for staging this event. We need more Shakespeare in Grantham, and I’m pleased to see that Kesteven and Grantham Girls’ School are staging A Midsummer Night’s Dream at the theatre, 16-17 July.